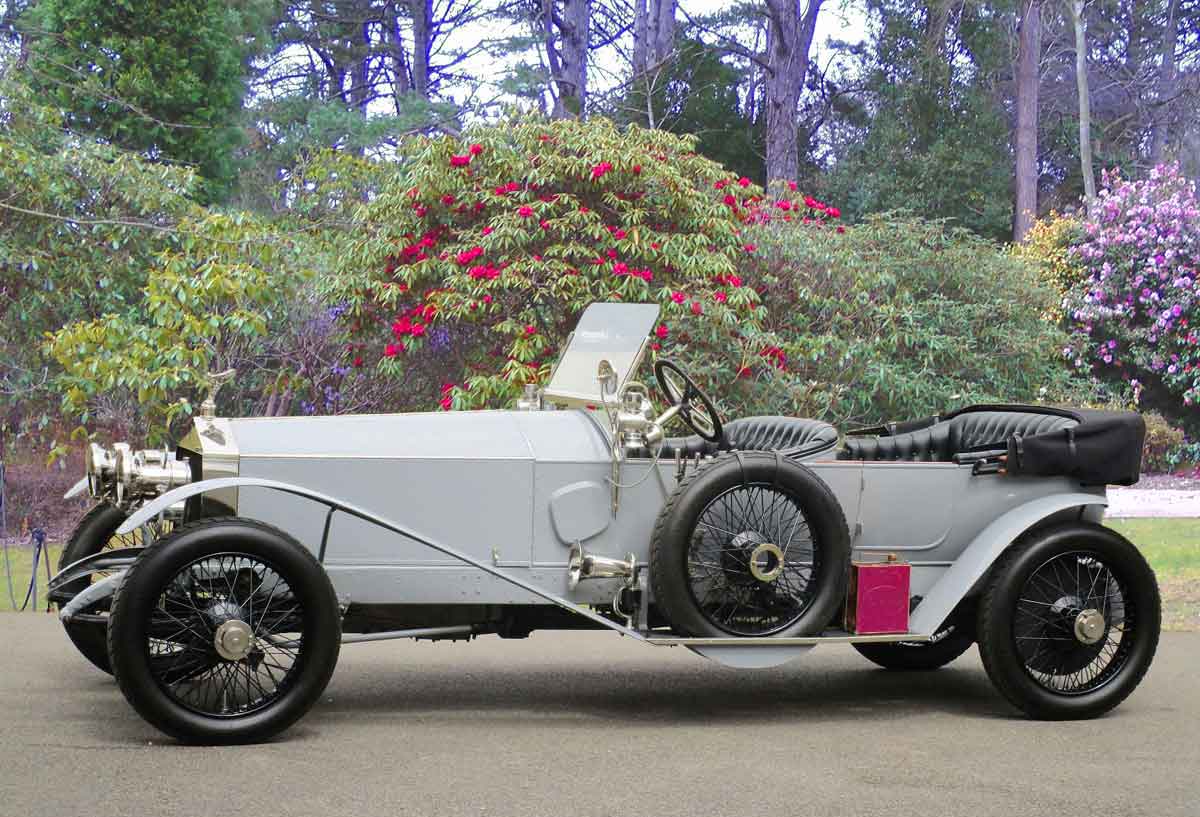 One of the most important decisions ever made by the Rolls-Royce board was to concentrate on building one model only, rather than following the herd and offering multiple choices. By concentrating on just one model, cost would be reduced because of the reduction in the number of specialised tools, and employee training, needed; and all the company’s resources could be concentrated on making this car as perfect as was humanly possible. The result of this was what is claimed to be the most famous car ever built, the Rolls-Royce 40/50 HP, or Silver Ghost.

There was originally just one car named Silver Ghost, and this was one of the first produced, which was so named by the factory because, well, it was painted silver and it was as quiet as a ghost. This name became popular, and from then on just about everyone used it for 40/50s.

All the Rolls-Royce cars prior to this had really been based on Henry Royce’s work on improving the Decauville. This one however was to be a completely new car, designed from the smallest bolt upwards by Royce. By present day standards the power output was woeful; the huge 7036 cc six cylinder side valve engine, with two spark plugs in each cylinder, generated just 48 brake horsepower but it was virtually unbreakable. it was put through trial after trial, and inevitably came off best against the competition – except on one occasion, about which, more later.

It was smooth and quiet as well. A penny could be put on edge on the chassis, or a glass full to the brim with water placed on the bonnet, and the engine run to 1600 rpm, and the penny would stay vertical, and not a drop would be spilt from the glass.

At the time, the big test was The Reliability Run. Cars were run non-stop by a team of drivers and in 1907 the world record was an endurance of more than 7000 miles. A team of Rolls-Royce employees and directors, including Charles Rolls himself, drove the original Silver Ghost between London and Glasgow with the engine running throughout, except on Sundays; those were considered to be rest days on which no work should be done not even by a car engine. They covered 15,000 miles more than doubling the previous record.

The car was then inspected by engineers from the RAC who decided that the only repairs or replacements necessary to bring the car up to the standard of a brand-new one (apart from tyres of course; they were still pretty rudimentary in 1907 and several of them had already been replaced) and the only defects noted were about 1000th of an inch wear on a couple of steering parts, some minor wear to joints in the magneto drive and the water pump glands had to be repacked.

The only serious competitor in Britain was Napier, who had been insinuating for long while that Rolls-Royce cars were only suitable for old ladies. They had recently driven a car from London to Edinburgh, in top gear all the way. Rolls-Royce did the same thing and got more miles to the gallon, demonstrating the superiority of their car at least as far as economy was concerned. They then took the same car and put a racing body on it and took it to the Brooklands racecourse where it was taken up to a hundred mph; the first time this had ever been done. Napier’s whispering campaign about the Silver Ghost being an old ladies car was quietly dropped.

In 1912, though, disaster struck. An eight day trial was organised by the Austrian Automobile Club over the Austrian Alps. This was designed to be the toughest test yet of cars and drivers. Naturally a Silver Ghost was entered and was expected to do the usual thing and leave the competitors in it’s wake but on one of the steepest climbs the car failed to keep going and could only be persuaded to move on when a couple of passengers got off. Things like this could destroy a car’s reputation and there was only one way to solve the problem, and that was to prepare a car thoroughly for the following year's race race and nothing else.

A small squadron of cars were sent out to look at the atmospheric conditions, the sharpness of the bends, the steepness of the climbs, the condition of the roads. A freshly designed car was prepared with a stronger suspension, greater ground clearance, flexing radiator mounts and a modified four-speed gearbox. Four cars were entered for the 1913 race and they swept ahead almost in convoy to annihilate the competition. Once again Rolls-Royce were considered by many, perhaps most, to have confirmed that they produced the best car in the world.

Over the following 20 years around 6000 Silver Ghosts were sold, with just a break during the war years whilst the company concentrated on converting them into armoured cars. It was never a cheap car; it wasn’t designed to be; but anyone who has an early model in reasonable condition to sell today will be expecting a seven figure sale price at least.
© 2020 Malcolm Bardsley. All rights Reserved.